You are here:
< All Topics

A bill of material, simply put, is a list of raw materials, components, and sub-assemblies required to construct, manufacture, or repair an item and the quantities for each. A BOM (bill of materials) is also known as a formula, a recipe, or ingredients list in process industries.

Ascent supports two types of BOMs: non-phantom and phantom. A non-phantom BOM represents a finished good or sub-assembly that can be stocked and sold. A Production Work Order can be created for it, with components being consumed in the completion process. A phantom BOM can be used for planning purposes and cannot be stocked. While a non-phantom BOM results in a single item that can be sold, a phantom BOM is typically used to represent a group of required components common to several similar non-phantom BOMs. Often, this is called a “kit”. Because a phantom BOM consists of specific components shared amongst non-phantom BOMs, they are often used to simplify the management of these non-phantom BOMs as well as allow for sales to order a “kit” and have the warehouse storeroom people pick the components of the kit for the purpose of shipping them out on a sales order. The item that is designated as a “BOM-phantom” will NOT be picked, since it only exists to support the kitted items below it in the BOM for picking purposes.

Additionally, Ascent supports multiple BOM Versions. BOM Versioning can be turned on via a Custom Setting. If BOM Versioning is NOT turned on, then each item which has an item type of BOM would be  eligible to have a single bill of material.

Notice that there are no versions, revisions, or multiple BOM names.  This is intentional, since many companies will create a new item and subsequent new BOM for any changes to the BOM structure. 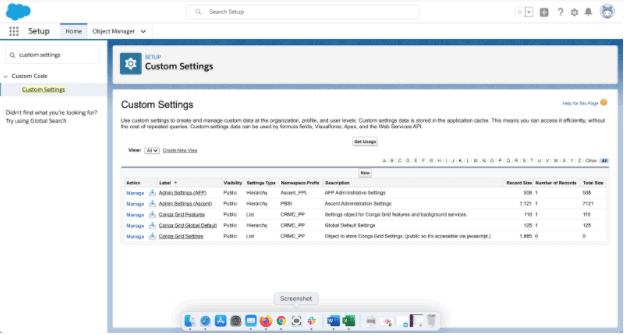 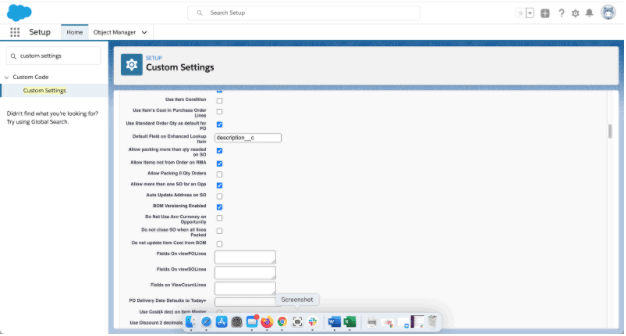 If this is checked, then you will have the ability to create multiple versions of a BOM for an item. Some modifications you will see in Ascent are:

The BOM screen in item master, if ‘BOM Versioning Enabled?’ is selected, can now look like this: 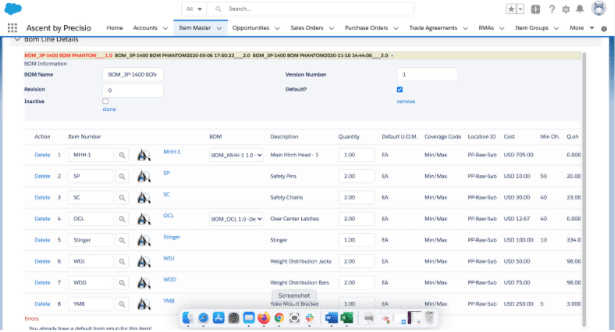 The uses of multiple versions of a BOM are many. Here are just a few:

To create an item which is eligible to have a bill of material associated with it, the following fields need to be set upon item master creation:

Item Type = must be set to BOM 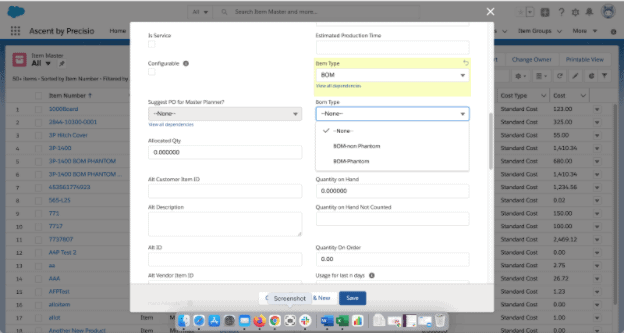 After creating the item master record, scroll down to the section called BOM Line Details to add each component of the BOM (whether a BOM-Phantom or BOM-non Phantom). The fields that can be entered are:

Item Number – This can be entered or queried, a valid item number in Ascent.

Quantity – This is the quantity of this component to be used to make 1 of the assembly (finished good).

Show on Form? -If this is selected, then this component will appear on the sales order lines view after selecting the assembly (finished good) on a sales order line.  If left blank, this item will not appear.

Fixed/Var. – This field is used to indicate that this component quantity is NOT multiplied by the quantity to build. For example, on a production work order or in calculating the requirement of this item.

On the Master Planner, you may want to make 1000 gallons of paint, so your BOM would reflect that, except for a component which could be a single gallon of cleaner/solvent that would be used to flush out the lines. You would use a single gallon, whether you were making 1000 gallons or 50 gallons, the single gallon quantity wouldn’t change. The fixed name stands for Fixed/Variable. 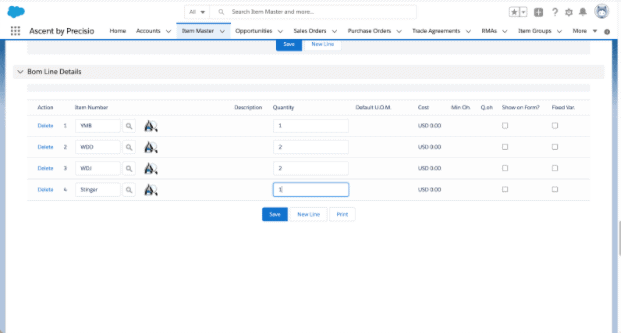 In the example above, we continued to hit New Line to add additional components. Doing it that way, no reads are done against the item master to extract the Description, Default U.O.M., Cost, Min Oh, or Qoh.  You can, however, hit Save to periodically check this and then continue on with New Line. Once you’ve added all your components, you can hit Save to save them all. 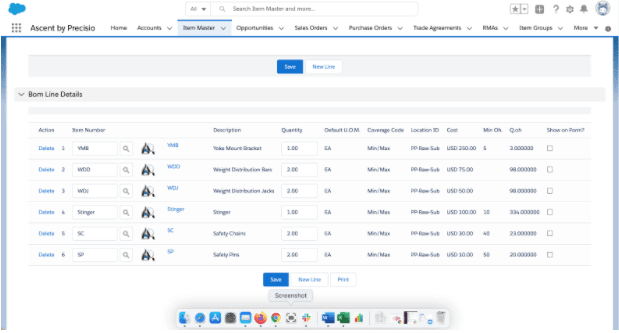 Notice in our example above, ‘BOM Versioning Enabled?’ Is turned off.

Now, if we turn it on, and look at the same BOM, it will look like this: 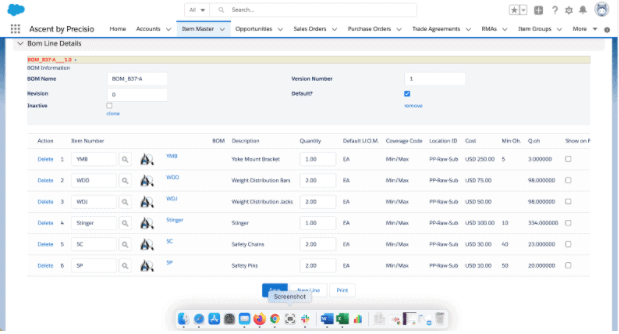 Notice the new fields that appear:

Version Number – The initial BOM created when ‘BOM Versioning Enabled?’ had been selected was given version 1.

Revision – This is an additional optional field that can be used to further define this BOM.

Default? – If this field is selected, then this BOM will be used in determining the rolled up cost of the components to come up with the total cost of the BOM. This will also be the BOM used by Master Planner in determining the component replenishments for any BOM requirements, as well as the default BOM used when creating a Production Work Order and taking the default.

Inactive – This indicates that this BOM is inactive and should not be used or referenced.

Remove – By clicking this button, you will remove the BOM currently being viewed.

Clone – This field is used if you wish to create a new version of the BOM. When you click it, the following appears: 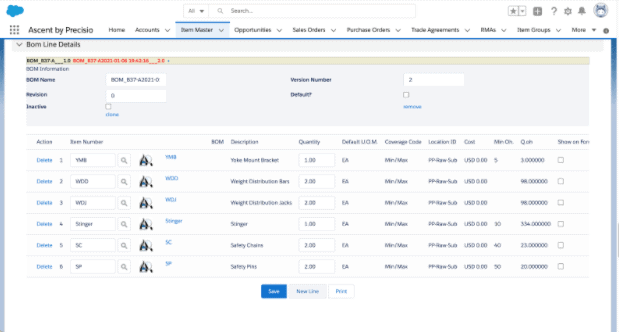 First, a new BOM is created, with the new BOM name being equal to the old BOM name plus yyyy-mm-dd hh:mm:ss__versionnumber. You can type over this field and give it any name you wish, but this is what gets derived by Ascent. It will also take whatever was the Version Number prior to hitting ‘Clone?’ and add 1 to it. The Revision will stay the same, but you can optionally change it.

You can add new components, change existing ones, or delete existing components on the BOM.

The newly assigned default rolled up costs will be used on the item master and on the BOM record from this point on.

Was this article helpful?